Write Out Loud by Amy Cobb is licensed under a Creative Commons Attribution-NonCommercial 3.0 Unported License.
Based on a work at https://writeoutloud.edublogs.org.

We have over 250,000 visitors to our six year old blog. This is a new ClustrMap due to a server failure on their part.

Students, please read the article below first, watch the video, and then answer the questions below.

Have you ever watched an Internet video that teaches how to do something or explains an idea or problem? Have you ever considered making a video like that?

A Science Star Already, Tinkering With the Idea of Growing Up 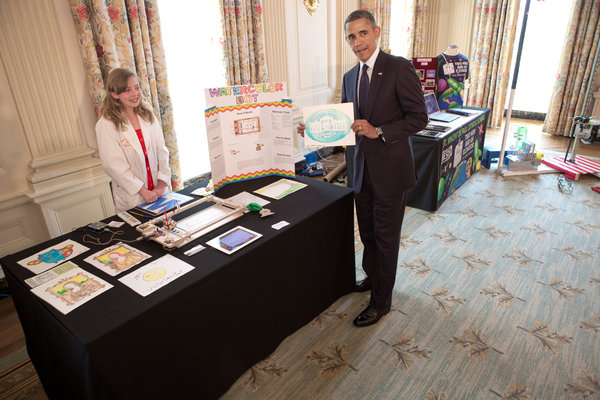 Sylvia Todd’s desk is not tidy. It’s cluttered with small robots (including a solar-powered grasshopper), motors, wires, resistors, a soldering iron and an array of other gadgets and tools.

A maker, tinkerer and online celebrity, Sylvia has attracted more than 1.5 million YouTube views of the show she produces and hosts, the Web-based “Sylvia’s Super-Awesome Maker Show.” She is sought after for speaking engagements, visits maker fairs and even addresses TEDx conferences.

Last week she won a silver medal at an international robotics competition. And on Monday she took part in the White House Science Fair, where President Obama tested her latest project, a robot that paints.

With her father, James Todd, filming her, Sylvia uses puppetry, theme music and her home as a laboratory to demonstrate how things work. She makes science fun, mostly by having fun herself.

An audience of fellow makers, especially science-minded parents and children looking for projects, follow her D.I.Y. episodes — 19 so far — on circuit boards, sidewalk chalk, rocket ships and her favorite, an LED shield.

In one episode, Sylvia made dough that can conduct electricity. The salty dough, when mixed with water, acts like wire to allow electricity to flow through it, while a second batch of dough made with sugar acts like insulation and resists electricity. Sylvia used the conductive dough to light up LEDs, make noise and run motors.

Her most popular episode, on copper etching, attracted more than 200,000 views. Her fans learned how to create a circuit board and a copper pendant.

And her latest continuing project, though not yet a subject on her show, is a robot that can paint. She showed it off at the White House Science Fair, an invitation-only symposium for 100 students that is hosted by Mr. Obama, who views and comments on the students’ projects.

The president tried out her watercolor robot, doodling “Go STEM” — the acronym for the fields of science, technology, engineering and math — on an iPad. The robot painted his doodle, which Sylvia said she would frame.

“I shook his hand twice!” she said. “And he picked up a printed version of the White House logo that my robot did.”

Sylvia’s celebrity comes from her YouTube series, which she produces and hosts. It is a family collaboration — her mother, Christina, for instance, came up with the pendant idea — but is distinctly Sylvia. She can be age-appropriately silly, but she takes her projects seriously.

“Ever since I was really young I liked destroying stuff,” Sylvia said. “I’ve always been interested in making and doing things hands-on.”

The seeds for the show were planted when Sylvia was 5, and she and her father attended the Maker Faire in San Mateo, Calif., an annual event organized by Maker Magazine that celebrates makers and their projects. Two summers ago, Mr. Todd began videotaping Sylvia’s demonstrations, as a summer project. “We just wanted to do something fun,” Sylvia said.

The popular blog Boing Boing reported on their first episode. Then Tech Crunch, Jezebel and other sites followed with praise. Make Magazine hired Sylvia to produce some of her episodes for its Web site.

Mr. Todd, 29 and a high-school dropout and Web developer, shares a tinkerer’s spirit with his daughter. (“If you do the math, I was young,” Mr. Todd said of Sylvia’s birth. “Too young,” she chimed in.)

“There was no formal maker movement when I was a kid,” Mr. Todd said. “If there had been, I would have been part of it.”

He and Ms. Todd have three other children, ages 3, 6 and 8, and he is the family’s sole breadwinner. Money is tight, and most of the science kits that Sylvia uses in her videos are donated to her. She raises money online to pay for some of her trips.

For the White House Science Fair, for example, Sylvia and her father created a campaign on a site calledgofundme.com. Two dozen well-wishers donated, and Sylvia was able to raise close to $2,000 for her trip to Washington.

This article has been revised to reflect the following correction:

In honor of Earth Day, I pose this question to you. What’s the coolest thing you’ve ever seen in nature and where and under what circumstances did you see it?

What was the first thing that came to your mind when you read the question, “What’s the coolest thing you’ve ever seen in nature?”

Students, if you could design the ideal summer camp experience, what would it be like and why?

Students, this prompt comes courtesy of the New York Times Learning Network. The U.S. Postal Service made a recent announcement that it will stop delivering letters and other mail on Saturdays.

My question to you is this: What is the best, most interesting, most memorable thing you ever received in the mail? There are more questions to answer further down.

(From an article) Ron Nixon writes:

The Postal Service is expected to announce on Wednesday morning that it will stop delivering letters and other mail on Saturdays, but continue to handle packages, a move the financially struggling agency said would save about $2 billion annually as it looks for ways to cut cost.

…The Postal Service continues to see a decline in mail volume as more people shift to electronic forms of communication like e-mail and online bill paying services. Packaging is one of the few areas where the agency is seeing growth.

While many business and postal unions have generally opposed ending Saturday delivery, most Americans support the move.

A New York Times/CBS News poll last year found that about 7 in 10 Americans say they would favor the change as a way to help the post office deal with billions of dollars in debt.

– How do you feel about the Postal Service ending Saturday delivery?

–  What do you tend to get in the mail, if anything?

– What’s the best, most interesting thing you ever received in the mail? Why is it so memorable?

– What’s the most memorable thing you ever sent in the mail? Why?

Powered by WordPress | Hosted by Edublogs | Protected by CloudFlare